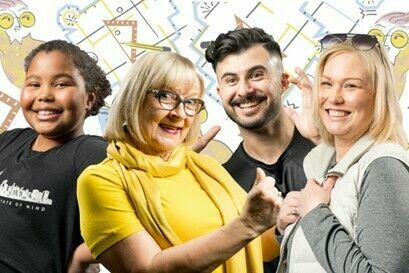 OmaStadi will be revamped – join us!

OmaStadi will be made even easier. Future changes will be based on feedback from citizens and city experts. Some of the things that residents want to see are improved usability of the OmaStadi website and a shorter and simpler process. An important aspect of the development work is to promote and support the equal participation of different groups of residents.

Residents can participate in the development of the OmaStadi process in many ways. During the spring, you can get involved by joining a digital developer community, where you can discuss and brainstorm solutions to various development issues. You can join the community by logging on at uusi.hel.fi/liity. The city will organise workshops in the autumn, inviting residents interested in OmaStadi to participate.

In autumn 2021, citizens voted on 75 projects to be implemented by the city. Helsinki has already started planning these projects.

The progress of the projects can be monitored at omastadi.hel.fi. For each project, the website shows a timeline of implementation, percentage of completion, the number of votes obtained, who is responsible and how to interact.

Residents can participate in planning the proposals to be implemented in many ways. For some projects, there may be interactive events while, for others, citizens can comment on the plans on the OmaStadi website.

OmaStadi provides a permanent way to participate and make a difference

You can participate in OmaStadi by submitting an idea and developing your own and collective ideas into proposals. Voting gives you a say in how money is spent in your area and across the city.

The good voter turnout shows that OmaStadi has attracted extensive interest from Helsinki residents across the city. In both rounds of voting already held, turnout has been over 8%, a high result by international standards.

The city has been implementing the Helsinki model of participatory budgeting – OmaStadi – since 2018. In Helsinki, two full rounds have been organised, from brainstorming to voting and the implementation of proposals. OmaStadi has increased citizen’s interest in making a difference in their own area and in the city in general. It has created a new kind of cooperation and debate among citizens and between citizens and the city.

OmaStadi is Helsinki’s way of implementing participatory budgeting. Helsinki is currently spending €8.8 million in a single round on implementing citizens' ideas. The ideas will be developed together into proposals on which the residents will vote. The city will implement the proposals that get the most votes.

In the second round of OmaStadi (2020-2021), 1,463 ideas were submitted to make the city more welcoming and functional. In October last year, 397 proposals were put to the vote and 75 were put forward for implementation.

It took me a while to read all the failed comments, but I really enjoyed this post play snake. It proved to be very helpful for me and I am sure to everyone who comments here! It's great that you're not only informed but entertained!

What a nice post, so I enjoy it so much. Besides, I am the owner of the Typeracer website where you can play a lot of hot racing games. Let's visit it now!

Helsinki uses OmaStadi to implement participatory budgeting. Helsinki is now investing €8.8 million in one round of citizen idea implementation. The suggestions will be used to form plans that the citizens will vote on. The ideas that receive the most support will be put into action by the city. gmail