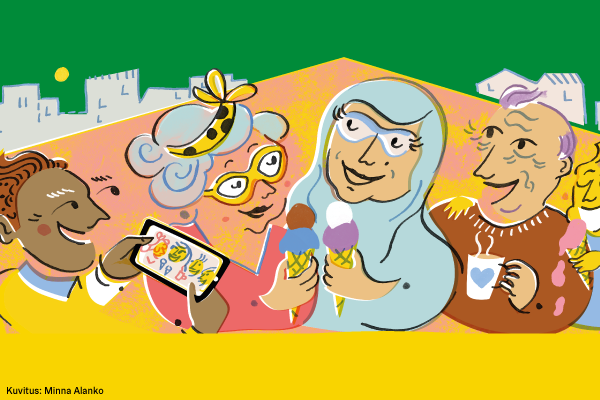 The publication examines the results of the OmaStadi vote and the voting turnout of Helsinki residents. OmaStadi is Helsinki’s way of implementing participatory budgeting.

In 2021, the City of Helsinki allocated €8.8 million to the implementation of proposals prepared jointly by residents and the city’s experts. One-fifth of the funds were allocated to projects throughout the city, and the rest were allocated to the seven major districts in proportions based on the number of residents.

The proposals to be implemented were selected by a vote in which all Helsinki residents aged 12 and over were entitled to vote. Voting took place on the OmaStadi website. Voters were asked to verify their identity with Mobile ID or bank credentials before voting. Service advisors at the city’s different service points assisted with the process. Students verified their identity with their Wilma password.

Examined by postal code area, the voting turnout of Helsinki residents aged 20 and over varied clearly. However, compared to the previous vote, regional differences in the turnout evened out slightly. The most active age group of voters was that of comprehensive school pupils, of whom nearly one-fifth voted in OmaStadi. The next highest turnout was in the age group of 30–49-year-olds. The voting turnout was lowest among Helsinki residents aged 75 and over.

Even though children had the highest voting turnout of all the age groups, their turnout decreased significantly compared to the previous OmaStadi vote. The still-strong voting turnout of children is explained by the fact that many schools gave pupils the opportunity to vote during the school day.

Examining all the votes as a whole, the proposals related to sports and outdoor recreation received the most votes. Compared to the previous round of OmaStadi in 2019, common proposals for the whole city gained more votes than before.

It would be useful to examine the factors influencing the OmaStadi voting turnout in more detail in the future, in order to reduce any obstacles to participation.

Participatory budgeting has been used in various parts of the world since the 1980s. Finnish cities and municipalities have applied it since the 2010s.

In Finland, participatory budgeting is based on the stipulation of the Local Government Act on the right of residents to participate in and influence the activities of municipalities (Local Government Act 410/2015, Chapter 5, Section 22). Participatory budgeting can be applied in many different ways. The name of the model used in Helsinki is OmaStadi.

In the bitlife Life Simulator, you will play a simulation game where you must make life-changing choices. For instance, you could wed the love of your life, start a family, and further your education. You can also choose things that, to be honest, will frighten your parents, but hey, maybe they'll be entertaining? You can start dating, start looking for adventure, incite a prison riot, smuggle bags of drugs, or cheat on your significant other. You choose the narrative. Although there are many interactive story games available, this is the first text-based life simulator that can adequately recreate the story.