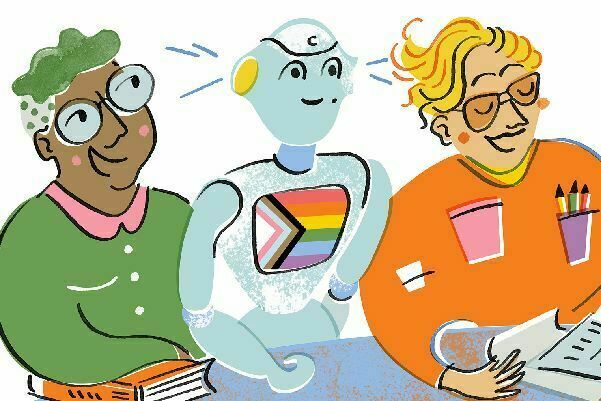 Towards non-discrimination in schools – Helsinki to realise LGBTQ+ seminars

According to the biannual school health survey, young people belonging to gender and sexual minorities experience more bullying, loneliness and school fatigue than other young people. One in ten young people is estimated to belong to a sexual or gender minority, so this is not a marginal group.

“We feel that these issues are discussed far too little in schools. In this respect, the quality of teaching should be improved,” say Emma Saarinen, 17, and Oili Ähkynen, 17.

Saarinen and Ähkynen were part of a group that came up with the idea of organising LGBTQ+ seminars at Helsinki schools. LGBTQ+ is a compilation of words referring to diverse sexualities and genders.

The group hoped that schools would provide better information and teaching about diversity. The aim was to have more equal schools where no one would be discriminated against. At the time the idea was conceived, the young people attended Porolahti Comprehensive School. The proposal was formulated in a joint workshop at Herttoniemi Youth Centre and refined during meetings with a youth worker. Finally, the group wrote a short presentation of the proposal.

“We thought that now we put the idea to the vote, and if others thought it was good, it would succeed. We didn’t really do any campaigning or anything,” says Ähkynen.

As it happened, the proposal was found good and important. The proposal was particularly popular among young voters, receiving a total of 3,416 votes from Helsinki residents. With that, the proposal passed, and now, the group’s idea is being implemented by the Helsinki Education Division. A budget of EUR 100,000 has been set aside for the implementation.

Young people involved in the implementation

The plan is to organise a seminar on sexual and gender pluralism for the academic year 2022–2023 in each Helsinki comprehensive school for grades 6–9.

“This is a very important project, and I am glad it was voted through. Young people discuss the topic a lot, and we have had hopes for something like this,” says Heidi Halkilahti, a pedagogical specialist at Helsinki Education Division.

A project planner will be hired to coordinate the work, and the seminars will be organised in cooperation with a specialist training organisation. Young people, however, will have a major role.

“The project planner is to ensure that young people’s voice is heard in the planning and implementation of the activities. It is also important to use the experience to determine the kind of material that could be useful in the future. We must ensure that this is not a one-time thing so that these important matters will also be considered after the project,” says Halkilahti.

The group behind the proposal agree.

“Young people must continue to be involved in the schools’ practical activities. The most important thing is that the voice of the minorities is heard,” they add.

Emma Saarinen and Oili Ähkinen found it easy to participate in OmaStadi and that it actually allows you to make a difference. Above all, they are delighted that an important matter is implemented so quickly and city-wide.

“It is great that, for once, such an important initiative will come to fruition quickly instead of being mulled over for years,” says Saarinen.

Hopefully, future school health surveys will tell a brighter story about the well-being of young people belonging to gender and sexual minorities.

The city will spend EUR 8.8 million in two years on fulfilling the wishes of the residents. First, the residents share their ideas to improve the city, then develop them into proposals with the help of experts and finally get to vote on their favourite proposals both for their area of residence and the city as a whole. The proposals that get the most votes will be implemented.

In the second round of OmaStadi (2020–2021), 1,463 ideas were submitted to make the city more welcoming and functional. A total of 397 proposals were put to the vote, of which 75 were voted for implementation.

In 2022, OmaStadi will be developed simpler to use by, for example, a digital developer community and workshops.

Thanks for the information, I will try to figure it out for more. Keep sharing such informative post. CheckMyRota